Feel free to call us with any questions about arrow spine or anything else in the website.

Still to come... We have a large number of closeout books as well as used books. Many books from my dad, Glenn St.Charles' own bookcase. 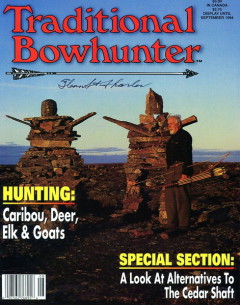 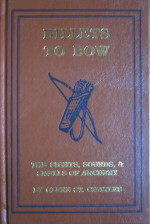 Signed by Glenn and Numbered 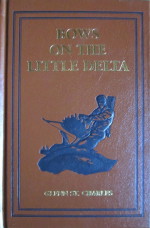 Sorry, we are out of these.

BOWS ON THE LITTLE DELTA

Signed by Glenn and Numbered

About "Bows on the Little Delta"

The centerpiece being the saga of the Alaska Little Delta hunts beginning in 1957. Three bowhunters took to hunting animals in the Alaska range, unknowingly following the bootprints of pioneer bowhunter Art Young, where, in 1922, he felled a Dall sheep on a glacial moraine in the headwaters of the Wood River, less than forty miles away.

This is the same place the author invited Fred Bear and cronies to hunt with him in the two following years - 1958, 1959. The book is full of hunting stories in other places, most before fair chase, and trophy hunting when bowhunters shot everything that came down the pike. That and much more about the author's life, his philosophy and thoughts as to the future of bowhunting. If you like adventure, this is it!

Glenn St.Charles was born in Seattle, Washington, December 15, 1911. A son of a timber cruiser who, at the turn of the century, brought his family from Alpena, Michigan to the timber country of the great northwest.

Glenn spent summers with his dad in the Kaniksu National Forest of northern Idaho. This was the backdrop for Glenn to observe ways of the animals of these remote regions - deer, elk, moose and bear. He became a bowhunter, a bowyer, making hundreds of bows from the rich-colored yew he found combing the Cascade Mountains. He became a fletcher, making arrows from the tough spruce and Alaska cedar. He cut crude blades out of old retempered hand saws for broadheads.

St.Charles was the founder of the Pope and Young Club and Northwest Archery Company. He was an emeritus member of the Boone and Crocket Club, and a member of the National Field Archery Association, and the Professional Bowhunters Society. Glenn was elected to the Archery Hall of Fame in 1991. His written words have appeared in many archery publications for the past sixty years. His video, "Billets to Bow" was produced in 1984 to preserve the art of bowmaking. It was followed in 1996 with the written version in his book "Billets to Bow".